skip to main | skip to sidebar

Cammi Tricked Me Into Writing A Blog

Hi everyone, I just finished doing a salsa dance to a Spanish tune we
probably picked up somewhere along the trip. Cammi danced with me too and
it was really fun. It was also pretty amazing that I lasted through the day
only playing the DS for an hour and watching only one movie. On long
passages I normally do lots of electronics. We also just had a homemade
chicken curry with rice and awesome homemade Naan (a type of really good
Indian bread). Cammi is reading me a really unpredictable book right now
called Found. It's part of a series of books that I like. Well, I want to go
play PSP and Cammi is going to read me Found. Bye!

By the way, Cammi typed this. 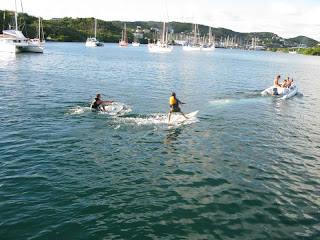 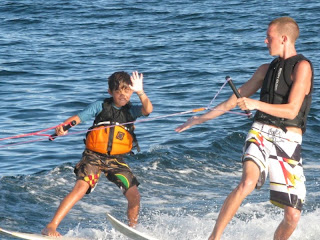 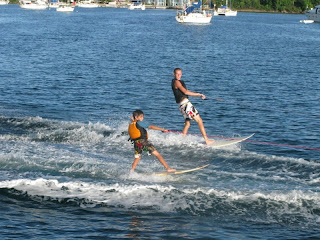 Have you ever heard of scurfing? It's a really cool sport I just
learned from my friends, Marshall and Parker. You get pulled behind a
dinghy while standing on a surfboard. You can also do it kneeling.
Here are a few photos of me with Parker.
at 8:44 PM 9 comments:

Today was very interesting. My mom thought we were going to do a lot
of composition, but instead, we got to do cinquains. If you are
wondering what a cinquain is, it's an oriental verse of five lines.
There are two kinds, word-count and syllable-count. Here's the ones I
came up with today.

Star shine
Shining so bright
Like a moon on fire
Dancing, prancing around the Earth
On fire

Hope everyone at home is doing great. I don't usually write blogs. I
will try and get better. 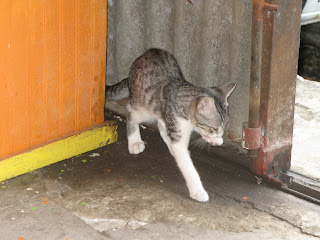 Yesterday at the chocolate factory, I saw a little kitty. He was a
little plump. I was guessing he ate the chocolate. I was wondering
if a kitty could survive on just chocolate, but I think that one did.
I don't know how, or if I ever will know for sure. I figured that
because the kitty was walking around like he was at his own home. He
was scared of people, though. My mom just barely got a picture of
him. We also tried some cocoa. If you ever go to Grenada, you have
to visit Belmont Estates. It is the best chocolate on the planet.
They have 71% cocoa and 60% cocoa. Every bar is a foot long. We got
four bars. The best part about it is that they don't expire until
2010. They are "organic" and last a long time.
While we were at Belmont Estates, we saw a parrot that could talk. It
would say, "Polly want a cracker", "bye" and it would laugh like a
human. There was also my favorite, a monkey. Both of them were
really cute. The lunch they served was really good, but we ate it for
dinner, not lunch.
at 12:18 PM 4 comments:

I've been reading a lot but haven't done many book reports. Here's a
few that I need to catch up on:

"World According to Humphrey"
This book about a hamster that gets taken home every weekend from
school. Humphrey is the class pet. Every weekend he'd have an
adventure at somebody's house. It was different every time, sometimes
good, sometimes bad, mostly good. It was a substitute teacher who
bought him from a pet store. He would have gotten taken back to the
pet store if the whole class didn't like him. The main teacher did
not like Humphrey, but in the end she grew fond of him. Overall, it
was a pretty good book.

"Jack Sparrow: The Coming Storm"
In this book, the main character was Jack Sparrow. He's a kid in this
version and this is when he gets his crew to get on his sailing ship,
the Barnacle. He has a girl and 3 boys as a crew, overall they are a
smart crew. Someone follows them and controls storms and sends 3
storms right at them. If the storm controller got hit with a storm,
he got wiped out, and that is exactly what happened. The book was OK,
but I have read better.

"The Homework Machine"
Just a couple of days ago, I finished a book called, "The Homework
Machine". In the beginning it didn't make sense, but eventually I got
it. It was about a kid who accidentally spills his secret that he
built a machine that does your homework for you. When other kids
found out about it, that's when he spilled the secret. They started
running and everyone was after them. The whole book was really short,
but good. If you get a chance, you should read it.

"A Diary of a Wimpy Kid - Part 1"
This book was about a kid who want a journal, but gets a diary. He
actually writes in it when nobody is looking. His brother, Roderick,
always tries to steal it. He accidentally breaks his friend's arm by
throwing a football under his bicycle while it was going really fast.
The kid flipped off and broke his arm. His mom went ballistic and
made him do his friend's magic act with a first grader. He is in
fifth grade. The part I liked the most was when he threatened high
school kids with calling 9-1-1. It was a really funny book.

"A Diary of a Wimpy Kid - Part 2"
This book is the same as the first one, just his older brother,
Roderick, knows a secret and is holding it over his head. Whenever he
asks Roderick for help, he gets tricked and messes up. When the
secret was spilled, it got all changed and ended up being really
good. Roderick got really embarrassed. Now, he's got something to
hold over Roderick's head. I can't wait to read the third one.

Zombie Butts from Uranus (the planet)

I just read a book called "Zombie Butts from Uranus". And if you are
wondering, the Zombie Butts are from the planet: Uranus. There are a
lot of funny characters in it, but the basic idea is about a boy
named, Zach Freeman and, of course, his butt. They try to stop a
zombie butts from Uranus, because they were trying to take over the
world and they were indestructible. They gave off so much methane,
that 3 of the characters became immortal.

The most exciting part was when Zach got sucked into a black hole and
made it out alive. He was trapped with a girl who had methane
madness. She was singing all these nursery rhymes. Zach almost
thought of abandoning her, but he didn't. So, if you are looking for
a very, very, very funny book, that is disgusting and awesome at the
same time, read this one. by Cole Burgess To day I am going to sleep over at my best friend Thomas's house.
''sins there is only 4 more days until I leave''. I am really sad to
leave him but I will see him again when I come back. We saw Hancock
together . It was historical. I am going to see Thomas in 20 minutes
for the sleep over. Time to go bye.
at 10:55 AM 7 comments: Yesterday I designed my own Zen shirt and hat to wear on Zen. The Zen
shirt is red and white I also made an orange shirt. The hat is dusty
colored and has the Zen logo on it too. I also just bought new
sunglasses incase I lose the ones I am using now. You can see my dog
Harley is licking her nose my red and white shirt and my hat has not
come in yet but they will come in soon enough. Today I am going to go
to a dance rehearsal with my sister and my mom. In 16 days my sisters
best friend Katherine is coming down from Pennsylvania Cammi is so
exited to see her. It will be the last time cammi will get to see her
this year. For the las week we've basically been packing up the whole
house. Catch you later.
at 11:27 AM 3 comments: